“Jimi Jeff and the Gypsy Band rock the Riverwood Inn”

Jimi Jeff and the Gypsy Band will tear up the Riverwood Inn on the Avenue of the Giants in Phillipsville this Saturday night from 8 p.m. to midnight.

Jimi Jeff was born Jeffery Leon Robinson in Kentucky in 1956. At the age of 12, he picked up guitar from a gospel player who played at his mama’s church and by age 14, after hearing his first Jimi Hendrix album, he knew what he wanted from a guitar. Jeff is primarily a self-taught musician and Hendrix was a huge influence, but back then in the black community, funk, R&B and blues was the music of the day, so if he wanted to play in a band, he had to learn funk, R&B and blues…. So Jeff learned.

By the time he was 21, he decided to hit the road. He began touring the “chittlin” circuit of Alabama, Georgia and Tennessee. For the next nine years, Jeff toured the South, playing everywhere and anywhere a guitarist was needed. He stayed awhile with a band called the Magic Show but he got restless and the road called again.

By 1985, Jeff had hit about every town below the Mason/Dixie line so he headed up to Chicago where he began working that circuit, playing with the likes of Buddy Guy, Phil Guy, Lefty Diz, Lee Shout Williams, L.V. Johnson, Junior Wells and anyone else that needed a guitarist. Sometimes, because he had nowhere to live and very little money, he would sleep in the clubs after they closed. Those years in Chicago gave Jeff a broad range of experience and a solid background in blues which, combined heavily with Hendrix, influences his music today.

Eventually Chicago lost its luster for Jeff and he decided to move to Minneapolis, Minnesota where he started his first band, The Jeff Robbins Blues Band. He quickly became known around the area for his intricate guitar work and caught the ear of Buzzy Linheart who had played vibes on Jimi Hendrix’s album, Cry of Love. Linheart recognized the influence of Hendrix in Jeff’s playing and he was so impressed that he talked Jeff into making a trip to Seattle to meet Hendrix. Buzzy even nicknamed Jeff “AJ,” which was short for “Almost Jimi.”

Jeff decided to stay in Seattle for a while and he joined a band called The Society. It was in Seattle, home of his legendary idol, that he was dubbed “Jimi Jeff.” The band eventually moved up to Vancouver and reformed themselves as Jimi Jeff and the Gypsy Band.

Over his life, Jeff has hit some pretty rough spots but shining through everything is his talent and his love of music. The band has a huge selection of songs, some originals and some covers, but every song is special when it comes from Jeff. He puts his own stamp on every tune and his guitar literally sings. The entire band is polished, talented and entertaining.

Based now in Northern California, Jeff continues to play styles from Hendrix and Prince, and he can light up the stage with true R&B, blues and funk. His band has proven over and over that they can keep a dance floor filled as well as entertain and awe the audience.

The Riverwood Inn, located six miles north of Garberville on the Avenue of the Giants in Phillipsville, is well known for its live music and dancing. Stop by this Friday and Saturday, June 7 and 8 and enjoy a porch party and barbecue with steak, oysters, and prawns from noon until it’s over. Then come back on Saturday evening and rock the night away with Jimi Jeff and the Gypsy Band. 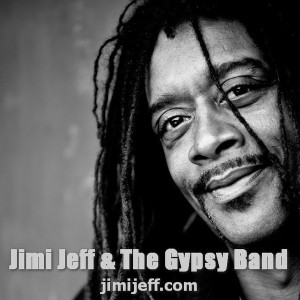